Does Bumble Notify If You Screenshot?

Know if Bumble notifies if you take a screenshot. 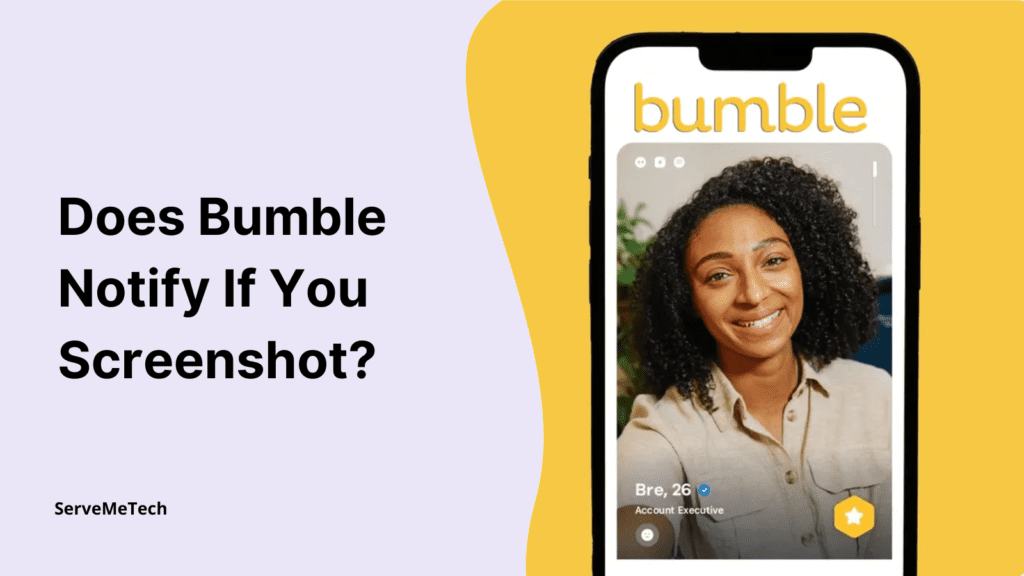 Sometimes you see something on Bumble that is too funny, or ludicrous that you just have to share it with your friends. At the same time, you may not want the users to know that you took a screenshot of a conversation as that’ll send a wrong message that you are interested in dating.

Bumble is one of those dating apps where you don’t want to trigger a notification that might make the person believe that you want to meet up if you intend to post their content on another online platform.

This might have you wondering, “Does Bumble notify the other user if you take a screenshot of their page?

The short answer is no. Bumble does not notify users when you screenshot their content or photos.

This means you don’t have to worry about being “found out” if you take a screenshot from the person’s profile or messaging center.

For those unfamiliar with Bumble, it is a dating app for those seeking a new friendship, romance, or business.

Bumble is different from other dating apps because only women make the first move. After a male profile is matched to a female, she must contact the man within 24 hours, or they lose the connection.

Bumble’s privacy policy and its progressive views of gender identity that allow transgender individuals to identify as female are part of the app’s success.

In same-gender matches, Bumble allows both parties to make the first move, but the opportunity expires if it doesn’t happen within 24 hours.

Like many other dating apps, Bumble uses swiping to browse through the profile pictures of prospects.

If you make a swiping motion to the right on a person’s profile, it indicates that you are interested. The other party is notified and also has the opportunity to swipe right.

If there is no swipe right then, you do not have a match. If there is, then you receive a notification of a match.

Private Conversations Are Initiated By Women

A well-known feature of Bumble is that a woman must always initiate the conversation, or the exchange does not happen. This feature sets Bumble apart from dating apps like Tinder.

Sometimes you want to swipe right, but before you do, you might want to take a screenshot of a memorable profile before you dump the individual as a potential date.

Remember that Bumble is not a private platform and that non-Bumble users can see some of the dating profiles.

How to Take A Screenshot on Bumble

Now that you know that you can’t get caught taking a screenshot on Bumble, here are all the ways to take one with different devices.

How to Take A Screenshot On An Apple iOS Phone

If your Apple cell phone device is older and has a home or touch ID button, press the side button and Home button simultaneously and hold for two seconds.

An animation appears onscreen, notifying you that your screenshot is a success.

On a newer iOS phone with FaceID, you press the side button and volume up button simultaneously for few seconds. The device will open a window that says “Screenshot.” Tap the window to take the shot, and then tap done.

On iOS phones, screenshots are stored in a folder called Screenshots.

How to Take A Screenshot On An Android Device

The screenshot is saved to your photo gallery on your Android mobile device.

Unlike other dating apps, the Bumble App does not allow you to watermark photos in the Bumble app; however other users’ photos are not considered fair game. Do not commit fraud by watermarking a photo that is not yours.

The Bumble Privacy Policy states that you can lose access to the Bumble Platform if you upload a photo where you are not the owner. So, this is a bit of a warning from the app developers not to steal the content or images of others.

Bumble is also strict with members who screenshot a profile photo and then use it as their identity. That can result in a ban or being reported to the authorities.

Here are some interesting facts about Bumble:

Bumble’s security is part of the success of this online platform. Violate rules at your own risk.

Bumble wishes you to respect everyone’s privacy, so it does not allow you to screenshot sensitive information, such as financial information or anyone’s phone numbers.

If you take screenshots of other users’ content to make rude, hateful, bullying, or misogynist memes, you can also be banned for violating Bumble’s privacy policy. Bumble uses automated systems and human moderators to ensure that its guidelines are not breached and that nobody uploads compromising photos or a mobile number or undermines anyone’s online privacy.

I hope that you find this article helpful, and as mentioned earlier, if someone takes a screenshot on Bumble and is found out, it can make for an awkward first date.